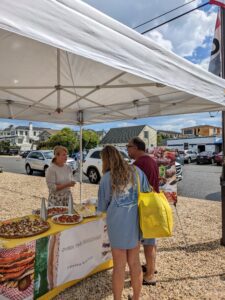 COASTAL TASTE: Denise Mauthe (left) discusses her new cookbook, Over the Bridge, outside the Cheese Shoppe over the holiday weekend. (Photo by JD Watson)

As rain clouds brought intermittent showers to Long Beach Island Saturday afternoon, Denise Mauthe, a first-time cookbook author, was scurrying under a canopy set up on the stones next to the Cheese Shoppe in Surf City, readying the final details for the book launch party for her newly published cookbook Over the Bridge.

As Mauthe uncovered platters of appetizers and hors d’oeuvres and arranged the platters just so, her husband, Chris, unpacked a box of the books and placed a stack of the hardcover, glossy paper cookbooks on the corner of the table. Looking at the sky, Chris said hopefully, “The weather may work in our favor. Maybe people will start leaving the beach.”

And then, as if on cue, people started gathering. First a few, then more and more. Then they started queuing up and as more people gathered, others began to ask what was going on. And so, buzz was generated.

“I bought the book inside,” a woman carrying a copy under her arm said. “Can you sign it for me?” “Sure, I can,” Mauthe said with a welcoming grin. The happy purchaser, Charlotte from Barnegat Light, explained the locality of the book figured into her purchase. “I like to support local,” she said.

“It’s a book about LBI,” Mauthe said. “It is a lifestyle book. There are real recipes, but there are also stories of gathering. It includes the boat scene, the beach, crabbing. It took me two years to write.”

Jaime Ryan, proprietor of the Cheese Shoppe, said it was only natural Mauthe should have her first event with the cookbook at his establishment. “She’d been in here a lot,” he explained. “Denise would come in, see what we had. She was always trying different stuff.”

Of the recipes in the book, Mauthe said inspiration came from varied sources. “Some are spur of the moment, some I made up after a little thought.” Others came from whatever was on hand. “I had some leftover watermelon so I decided to make a cocktail with it,” she said with a laugh.

Most of the recipes were inspired by local ingredients. “I asked myself, ‘What’s everybody eating on Long Beach Island? Fish, other seafood? Mostly, it’s about friends and family. It’s the whole lifestyle: concerts, sunsets, the farmers market. That’s what it’s all about.”

Ryan also thought having a book about food and entertaining on Long Beach Island was long overdue. “It’s about time we have a book about LBI,” he said. “Other areas have their books – there are books about the Hamptons, the Outer Banks, other destinations – now we have ours.”

The oversized book, which features pictures by local photographer Ann Coen, can be left on display almost as much as it can be a functional cookbook, Mauthe explained. “It’s a great coffee table book.”

Seeing the commotion outside the store, Christian Durando of Milburn, but who has been summering on Long Beach Island for years, thought the book would be perfect for that special someone. “I bought the book for my mother. My mom is coming down today,” he said. “It’s the start of the summer season; I thought this would be a nice gift. She is really a great cook. We come from a big Italian family.”

The arrangement of tasty tidbits on the tables in front of the store represented recipes from the book as well as items to be found within the Cheese Shoppe. “There are oat crackers with brie and fig jam. Feta, tomato and basil. This caramelized onion jam with brie is wonderful,” Mauthe said. “The recipe for that is in the book. And everything, all the ingredients, came from inside,” she explained, referring to the store.

Saturday’s event marked the “soft launch” for the cookbook; it will officially be available on big online retailers such as Amazon and Barnes and Noble on June 11, Mauthe explained. In the meantime, she said the cookbook could be found at various local shops across Long Beach Island. “It is also at Sink R Swim, Farias, Pearl Street Market, Sea Scape Home and Garden, Baked on the Beach, Aquamarine Beach Boutique, Fourchette, Reynolds … gee, I hope I haven’t forgotten anyone,” she said. —JDW